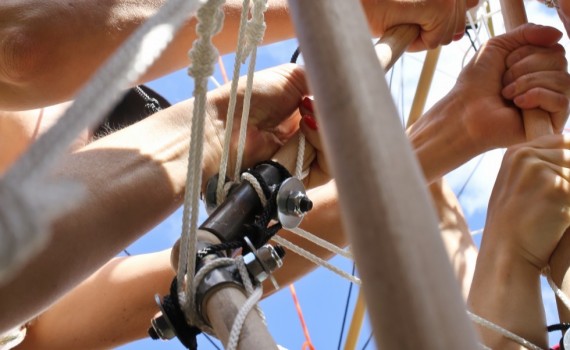 Collective(s) Making(s) is a timeframe within which Jordi Galí wishes to reflect on this question: how can an ephemeral and monumental structure be conceived and elaborated by several helping hands? Envisioned like a full-scale open-lab, the proposition is about observing which strategies are set up by a collective, a group in the making, while its members build a project together.

During three days, collaborators invited by Jordi Galí imagine a participative and experimental space, along with a defined strategy to observe this space, taking into account the following elements:

– How does a group act and decide to organise when facing a common challenge?
– How is it possible to channel and distribute evenly one’s energy so that individual creative resources can be implemented into the group’s creativity? Asking this as an attempt to safeguard one’s freedom of action and decision.
– How to prepare and foster the group’s creative thinking?

This time dedicated to research is organised around making and observing the making in progress, following two protocols:

(1) We invite a group of 15 participants to join us for one day of workshop.
The day starts with physical practices: warm-up, games, exercises stimulating social interactions, group practices. Then, settled on the stage, we will conceive and build collectively large-scale wooden models, using simple materials: wood, ropes, cardboard… At the end of the day, we will take some time to share our experiences. The day will also be punctuated by informal talks and exchanges, meal times and discussions.
(2) Meanwhile, we have put together a group of accomplices, observers and witnesses.
They will prepare with us the open lab, accompany the participants during the workshop and take time to reflect and sum up the participants’ experiences. How to observe and how to give feedback will also be discussed through a shared reflection. One goal is to create a toolbox, in which we could make the inventory of the key words, settings and operations spotted while the group is working together. Such tools are intended to be passed on, tested and fine-tuned, with time and further experimentations.

The conclusions we will be able to draw from these times of making and observing will be the starting point of a series of new researches on playing and building together.
In this regard we wish to give a great place to playing. Playing games is a powerful tool that can be used in order to encourage observation capability and stimulate an appetite for experimentation, both as an individual and as part of a collective. When we play, our relationship to others and to the world transforms inherently.

This lab will be one of the first research period dedicated to the possibility of associating playing with monumental and ephemeral structure-making for the public space, embracing a participative approach throughout the whole process, from conception to construction.